I know it’s Christmas and you are spending time with your family, but I wanted to share a quick story about Edward, our Elf.

He has had a rough couple of years, but this one is by far the worst.

Edward came to our house a few years ago, full of energy and magic.  He flew to the North Pole and reported to Santa on my perfect children’s behavior every night.  He reported every fight, spilled bowl of cereal, wrestling match, and back-talking incident they had.  I think he took notes there were so many.

The next year, he got lost…  Edward decided to hang out in the Halloween decorations so he missed his entrance the day after Thanksgiving.  Questions started flowing in…

“When is he coming?”

“How are we going to get presents from Santa?”

“Who does he think he is quitting his job?”

I just told them that they were so horrible the year before, Edward didn’t want to come back!

That went over so well with the kids that I had to play a few extra games of Monopoly that week in penance for  my joke.  And let them win…

Edward appeared a few days after that, $30 and a tank of gas later, from running around town trying to find a blue-eyed boy elf to replace him.  Stupid Elf.  We found his degenerate twin in the Easter decorations a few months later.  I swear he changed boxes in the attic after he ate all the candy off the kid’s Halloween decorations.

With a back-up safely in my pocket, I felt great coming into this holiday season.  Edward showed up the Monday after Thanksgiving.  Braxton, my 12 year old, after discovering the secrets of Christmas this year, along with the Easter Bunny and the Tooth Fairy, wanted to be in charge of Edward’s travel schedule this year.  I was all too happy to oblige, since I was terrible at coming up with ideas of where to put him AND remembering to move him.

Two weeks ago, Edward took a lofty position in the dining room chandelier.  Not really sure why since we never go in there because it is filled with all my photography equipment for blog photos.  Braxton wanted to eat dinner at the dining room table that night and put on a good show for Edward.  So we turned the lights on, cleared off all of my props and backdrops, and started to set the table.

Brooks was cooking dinner, so when I started to smell smoke, I thought it was the chicken…

When Braxton started to smell smoke, we looked up.  There was a tiny swirl of smoke drifting up from Edward!  He was on fire!  Connor walked in the room and freaked out!

“He’s on Fire!  We are not getting any presents this year!!!”

After we turned off the lights, I started to reach for him.  Of course, you are not allowed to touch him or he will lose his magic so I needed another plan.  I explained to Connor that you could touch him, just not with your bare hands.  Like a baby bird that fell out of the nest.

Break out the pot holders!

With my hands covered like I was going to remove a turkey from the oven, I plucked Edward from the chandelier with care.  Only then did we discover that he had a perfect hole burned in his butt.  Only in the Stewart house… “How are we going to fix his butt hole?” asked Connor.

I was not sure how to answer that. Knowing I had a back-up, I could just bring in the body double…

Connor had a great idea.  Wrap him in a Christmas towel, and put him in the nativity scene, next to baby Jesus, and Baby Jesus will heal him.  Perfect cover for the body double switch! We wrapped him carefully and tucked him in the manger.  The next morning he was gone.  The towel empty.  But no Edward.

Stupid me, lost the body double.

Now it’s Friday, two weeks before Christmas, and no ELF!  This sent Connor into hysterics, because not only were the kids bad as usual, but they physically harmed him.  Santa would never forgive them, and Edward was so mad that he would never come back.

Time for Amazon to save the day!
Searched, clicked, and promised delivery by Monday at noon.

How many Elves is this now?

Edward 3.0 arrived at 10:30 am on Monday, and after an entire weekend of explaining that Edward was in the hospital, recuperating from his third degree butt burns, I was glad he was here.

Only he was different.  Those Elfin’ Elf makers decided to change the body on this year’s model.  He was fatter, his head fuller, his legs thicker.  I hate the Elf on the Shelf.

I had to come up with something good.  Edward gained some weight eating Christmas cookies in the hospital!

Connor bought it, and was glad he was back.  I was too!  Now we could get on with the business of Christmas: breaking up sibling fights, messing up my kitchen with flour and powdered sugar, shouting expletives when I run out of scotch tape, and grabbling last minute gifts because I can’t remember anything!  True holiday spirit. Last night, Edward broke into my husband’s bourbon cabinet and drained a bottle.  I know the feeling.

I think Edward is retiring from our house after Christmas.  Connor said he won’t be back because Santa is going to fire him for drinking on the job.  Can you blame him?

Merry Christmas from Braxton, Connor, Brooks, myself, and out-of-work Edward.

Everyone at Take Two Tapas can’t wait to see you in 2016!

Thank goodness he is healed!

What a funny story! It seems that you have one heck of an Elf. It sounds like you have some great material to do a collection of misadventures of Edward the Ever Elusive Elf. Merry Christmas! 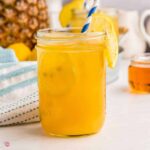 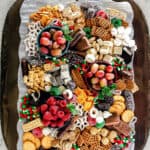